This page contains extra stuff collected from Jack and others.
Remembrances
The following documents contain remembrances of Jack, provided to me by some of his friends.  Some of them include pictures or links to pictures.  If you would like to add your remembrance here, contact me to arrange for sending your text and/or pictures.
NOTE: Upon viewing the following PDF files, please zoom in to page width for easier reading.
ROY PETTIT
MICKEY WALKER
WALLACE HUDSON
DANNY HANIE
JOHN KARLOVICH
TOM PHILBECK
RON REED

Extra Stories
Following are some written stories learned from Jack after the videos interviews were produced.
HELLCAT: DEAD STICK LANDING IN SWAMP (TO BAIL OR NOT TO BAIL)
HELLCAT: VERTIGO

Display Models  [ RECOMMENDED READING ]
The following document contains a collection of emails that Jack sent to his grandson in preparation for sending him the actual models.  Each email contained a picture of the model, and a write-up about the plane, and why it was important to Jack and/or his experiences flying that kind of plane.
DISPLAY MODELS

Photo Albums
Pictures from Jack and others have been collected over the years.  Some of these have been included in the videos at the appropriate time.  These and others have also been posted in on-line albums.  You are encouraged to browse through these albums at your own pace, and read the included comments.  By using your keyboards left and right arrow keys you can move forward and backward through the albums.
​
NOTE: On August 1, 2016 Google shutdown the photo repository that held the following photo albums, and replaced
it with a new and less functional repository.  Comments that were easily readable on the old system are now
hidden and hard to access.  These comments are important to understanding the photos.  To view them, click
on the first photo in the album.  Comments will be seen in a small font at the bottom.  Use the left/right arrow
keys to scroll through the album.
~~~~~~~
Sorry for the redundancy of some photos (unavoidable).
LARGE COLLECTION  --  In 2007 I borrowed a lot of pictures from Jack, scanned them in, and posted them in an online album.  More pictures have been added to it as they have surfaced.  After the pictures were posted I had Jack go through them and add comments to each picture.  Included in this album are pictures of planes Jack has owned in his lifetime.
RADIO CONTROLLED FLYING -- A sampler of Jack's involvement in RC flying both in Georgia and Oregon.
NAVY DAYS -- A collection of pictures related to Jack serving in the US Navy during WWII and the Korean war.  The "N" version of the Hellcat was a night fighter with a radar on the right wing.  Jack once told me that their 5N night fighters did not have any white paint on them, but you will see that some of these do.  Since I was a radar electronics technician in the Navy, I once asked Jack how the radar worked.  He proceeded to tell me in detail what the screen looked like, how it worked, and how you line up a target and when to fire even though you couldn't see the enemy (it was still burned into his memory).
LOCKHEED DAYS -- Pictures related to Jack's time working for Lockheed.  Includes the "HOW" project that was an attempt to make the C-130 capable of water operations by adding a hydrofoil ski.  Jack built a Radio Controlled test model that was used for testing.  The model had four nitro fueled engines.  A movie of this project exists that Jack used to take to RC airplane clubs for showing.  When word got out that Jack was explaining how the project failed because the engineers wouldn't list to Jack's advice as to the placement of the ski, Lockheed took the movie away from him!  Jack later proved he was right by changing and testing the model himself.
INSTRUCTOR/COMMERCIAL/CORPORATE -- Jack's time flying as instructor/commercial/corporate pilot.
MISCELLANEOUS -- Extra pictures not uploaded elsewhere. 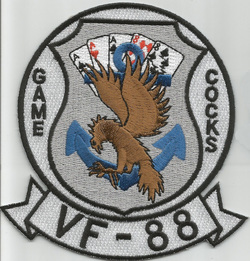 Jack Dunn was a Lieutenant JG in Squadron VF-88 on the USS Yorktown (CV-10) from late 1944 until late 1945.  Recently I discovered a 50-minute "home movie" taken by one of the other pilots in VF-88.  Most of it was taken during the early days of the squadron, before Jack was a member, but it gives a good perspective on what it was like for Hellcat pilots on the USS Yorktown.
WATCH "RETURN OF THE FIGHTING LADY"

Here is a web page devoted to information about VF-88, the "Game Cocks": VF-88 Hangar Bay

For an understanding of what life was like for a Hellcat pilot -- from training through combat -- the book "The First Hellcat Ace" by Jay A. Stout is highly recommended.  It's about Hamilton McWhorter, who, just like Jack, grew up in Georgia, had his first airplane ride in a Ford Trimotor, was Hellcat F6F flight trained at Pensacola and Melbourne, Florida, and served on an Essex-class aircraft carrier fighting the Japanese during WWII.

Here is a picture of Jack with VF-88 during 1945 (with comments from Jack at the bottom).  In this picture is squadron commander Malcom Cagle (back row right).  Malcom is discussed in the video and the Hangar Bay page.  Also in the picture is Jack's good friend Ted Hansen.  Jack is second from left, back row.  A typical flight of four Hellcats included a leader, his wingman, a second leader, and his wingman.  Malcom was the leader, and Ted was the second leader.  Jack was Malcom's wingman.  Jack flew an F6F-5N, while the others flew an F6F-5.  The "N" was a radar equipped night-fighter version which wasn't used at night all that much, and flew mostly with day squadrons (at least that's Jack's experience). 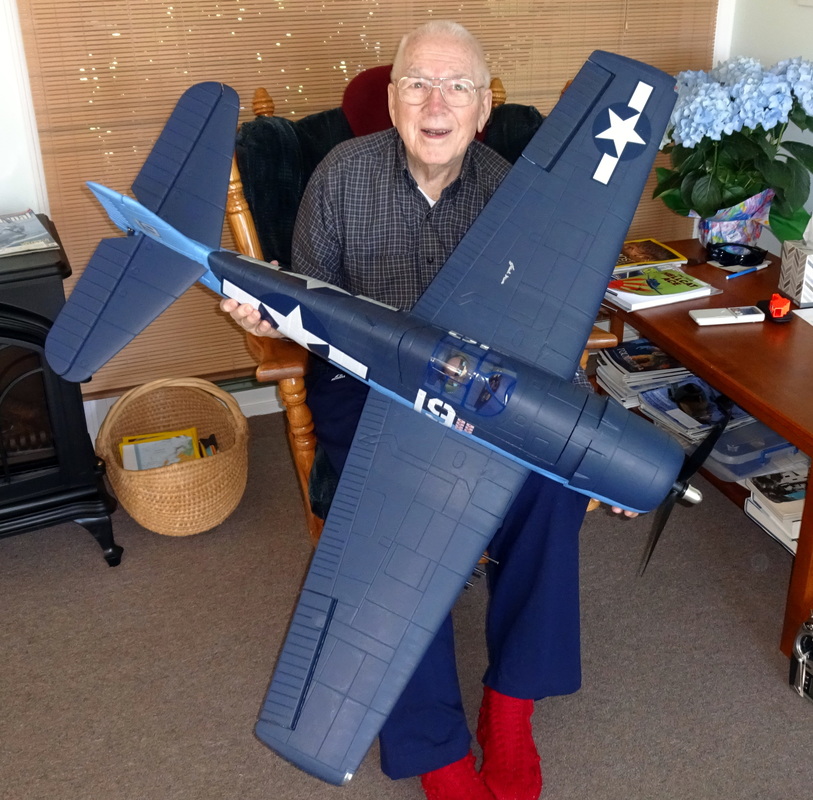 Jack Dunn with 50" radio controlled Hellcat built by Roy Pettit. Jack will go out to watch Roy test fly it soon. 5/18/2016
More pictures of this plane